Honesty is something that is hard to find in advertising and sales. Everyone is going to tell you that they have the best product available on the market and that you should buy their product over the competition because of x, y, and z. When someone calls a product the poor man’s version of a brand name product it is usually taken as an insult. We really believe that it does not have to be this way. If you are looking for an affordable and reliable raclette grill we may just have what you are looking for! The Hamilton Beach 31612-MX Raclette Indoor Grill just so happens to be as affordable as it is effective!

The first thing that you are going to notice about this grill is that the grill is not too fancy at all. The grill comes with a die cast grilling surface. Which for a lot of people might look like cheap plastic. It comes with the 8 spatulas and trays that most other raclette grills include. So, as far as serving capacity it is pretty much equal to a lot of the other small grills out there. Perhaps one of the best things that this grill has going for it is that it is dishwasher safe. Easy to clean and easy to cook what more could you ask for!

You are getting exactly what you are paying for, nothing more, nothing less! It takes a little of time to heat up and it won’t cook as quickly as a normal grill or maybe even other raclettes out there. Overall though, we were able to cook some meats and veggies on the grill top. With this particular grill, our chef really got creative with cooking some cheese filled veggie plates that were a delight. We are just getting hungry remembering! We are not just saying this, to boast about our chef, of course, if we did it, we think that you can do it too! We did have to preheat the steaks and we are glad we did. We finished cooking it on the grill and they got those characteristics grill lines that were a nice touch for our meal! We can really see this grill as a Sunday family favorite. Not so much as a main staple in your wine and cheese events!

This was by far the grill that we have done that we found the most honest reviews on from other users. We really did not take it as backlash or bad rep. People, for the most part, agreed that you have to be patient with the grill. As we mentioned in our tests we also pre-cooked the meat as was suggested. That rubbed a lot of people the wrong way though. If the box is telling you to pre-cook why would you get mad? Anyway, pretty much what we expected some complaints about the small cable going from the grill to the current no huge deal!

This is not the fanciest grill out there, but it's high quality and easy to use The people who made it know its limits and tell you about them. We really liked that, we knew what to expect from this grill and it delivered. You may have to pre-cook a lot of the meats and the veggies don’t rule this second part out! It is at a great price right at fifty dollars. Plus, you can easily wash it in the dishwasher, that is always great. It does all that you would expect for a grill of its size and price. You can really keep it as an in house product that you could use once in a while.

If we had to write out a phrase to describe this grill it would be “serviceable, but limited, very limited!”. A lot of these raclette grills are built precisely so that you can host what are known as raclette parties. This grill may not have the power to allow you to host such a party. A lot of times what you will have to do is precook everything and just use the grill to keep it warm. That is not the worst thing in the world. A lot of people end up doing that anyway with way more expensive grills! 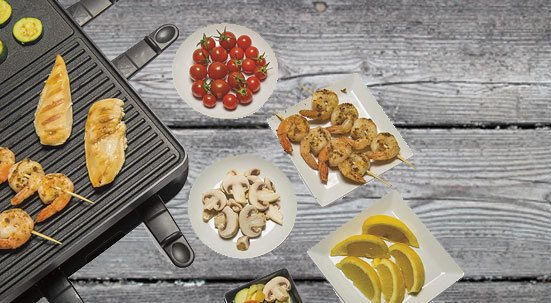 People have complained that they received this grill with poor packaging, so you really want to watch out for who your seller is. There are some used grills roaming around on the internet. We cannot really recommend that you buy this exact grill used. What are you really going to save 10 or 15 dollars? You will be getting a grill that is not really known for being extremely durable that was used by people you do not know for a 10 dollar discount! If you are looking at this grill as a viable option for you, buy it new and make sure that you are buying from a certified seller that provides a decent warranty. Other than that you can hit buy without too many worries …

We are really torn with this grill! We can’t really hold it to the same standards as other grills that we have taken a look at on this site, just based on the price and quality of the product that is being offered to you. We know that this is a budget version of other grills out there. Now, here is where you really have to ask yourself the next question. What am I looking to get out of this grill? At the very least, this grill can be used for some awesome raclette parties. hat we would say is, under the right circumstances this grill could be a decent buy. If you are looking for something fancy to wow your guests this may not be the best choice but if looks matter less I would go for this an an entry level raclette grill.    Check price on Amazon.